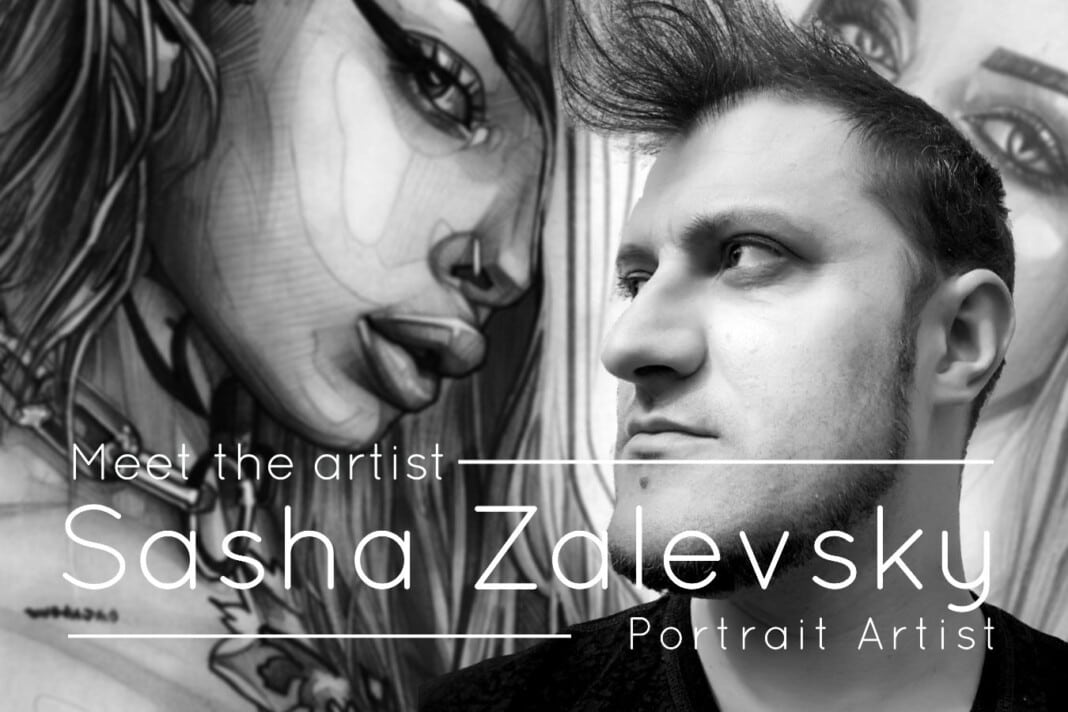 In this month’s Meet the Artist we have a talk with the talented artist Sasha Zalevsky.

I was bored in my world: I found my first pencil at the age of three and began to draw – all kinds of vehicles, excavators and tractors. Whenever I saw one, I tried to remember all its details so I could draw it later. As a child, it seemed to serve as my muse. Later, I spent nine long years at school studying incredibly unnecessary formulas.

Whenever I found myself feeling bored, together with a classmate, I would draw all sorts of skulls and similar things in the margins of my notebook until my teacher caught me. After high school, I attended art school and studied at the teacher’s college for around four years. However, I didn’t really want to be a teacher. I enrolled simply for the sake of drawing and managed to acquire some practical skills such how to hold a pencil correctly.

Once I had escaped all the unnecessary things that distracted me from creativity, I began to study Photoshop. It was 2007. At first, I was tormented by the mouse when trying to experiment with different brushes. I studied how it worked.

In 2010, I managed to get a graphic tablet Wacom Intuos4 L which greatly simplified my life in Photoshop. It’s now ten years old and starting to fail on me.

Because I am an introvert and not particularly interested in my outside world – I began to looking for creative personalities and models on Instagram.

Over these ten years, I have accumulated a lot of digital content. This is the result of my experiments in Photoshop and Corel Painter. I’ve also tried a couple of other applications but found them to be rather redundant.

In 2017 I got on the Internet and Instagram, which allowed me to draw with great speed.
I began to post my earlier work that had accumulated over the years, but quickly realized that very few people were actually interested in it. So, I began to mark people in publications.

I started looking for inspiration mainly in Italy. I’m not really interested in architecture and hyperrealism but prefer to focus on people’s faces. I started drawing notable ones like @yanasinner. I found myself interested in proportions and unique facial features.

In 2018 I came across a girl’s face that became my muse. I didn’t immediately understand it, but over time I realized that her portraits had inspired me more than anything else. I found perfection in her facial features, and I wanted to replicate this in my work. I just drew. Looking back, it was the most inspiring, emotional and creative state I’ve ever been in. I began to paint. It gave me a sense of aesthetic pleasure, as all the strokes and brush prints became harmonious on the canvas.

Although, this is not always the case. In essence, drawing is about fixing errors until the desired result is achieved. Digital art allows you to save a drawing at different stages, so as a result, you’re provided with several versions of one picture. A crucial part of my creative process is choosing the best version each and every time.

I think creativity is an attempt to find perfection in an imperfect world.

Although it might sound absurd, I agree. Often, the final versions of my drawings are completely different to what I had originally planned.

I have no vision of the future, only illusions. That might be because I’m a little too hyper focused and passionate about my work at the moment. I’m mainly focused on creating content and correcting details in my drawings.

Although this year has been difficult, I didn’t really feel the impact of the pandemic as others did – self-isolation is usually the norm for me. I am a bad traveller and there aren’t really any places in my city that I would like to visit.

In regards to my creative process, it always consists of two stages. I start off with pencil drawings which are then processed in Photoshop. Usually, I create a new layer with the blending mode “hard light” and paint in colour from the already scanned image. I tend to adhere to my own colour palettes too.

Further creative flow depends on the choice of brush. It was this realization that pushed me to start creating new brushes for myself in Photoshop and Corel Painter.

I then experiment with blending modes, styles and textures. However, I think I’d consider it more of a hobby than about the money.

Having been on Instagram for around three years now, I have come to find a great deal of inspiring creatives. I’d just like to note a few here: @byroglyphics, @art_by_lailamaria, @eric_lacan, @android_jones, @chasen9ne and more.” (Follow Sasha on his instagram to find out more of the artist he follows)

You can find the work of Alexandr Zalevsky on both Instagram and Behance. If you like to reach out to him, you can contact him on this e-mail address: chemical.brushes87@gmail.com

The Benefits of Coloring for Adults

Read more
This post can contain affiliate links. If you use these links to buy something we may earn a commission. It will help us to provide you with more content. Our opinions are not influenced in any way by this.