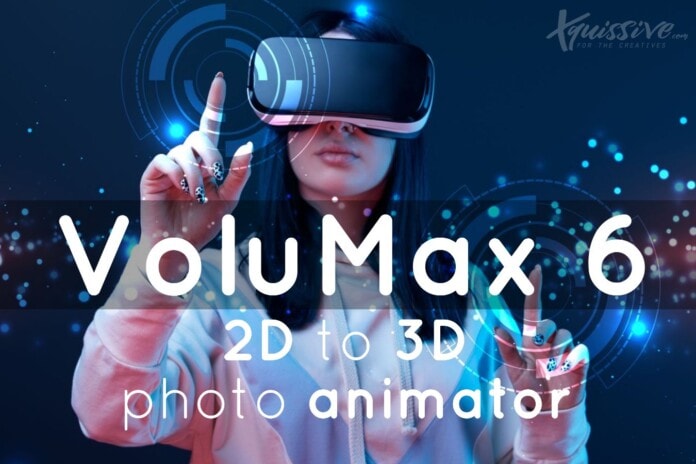 Have you ever wanted to bring your photo’s to life with a jaw dropping 3D motion effect? Well, you can with VoluMax 6 – a 3D Photo Animator created by Cream-Motion for Adobe After Effects. You don’t need to have a complex studio setup, but just 1 photo of the subject.

Although the first version was launched in November 2015, VoluMax has released a brand new Version 6. VoluMax has described itself as: “.. the best all in one toolkit on the market to turn your pictures into impressive 3D animations.“

The effect has also been used in the NRJ Music Awards, featuring Beyoncé, Justin Timberlake, David Guetta and many other popular artists.

The following video gives a good impression of the effects that you can create with VoluMax 6.

VoluMax 6 is a professional plugin for Adobe After Effects which you can use to create a 3D animation from a 2D photo.

How does VoluMax 6 work?

VoluMax 6 uses a combination of 3D Wire Mesh and Smart Objects to set up detailed 3D depth maps. Although this sounds quite complicated, you’re simply doing the following:

First, create masks using the Smart Masks tool in order to separate each area. For example: imagine there is a dog in the foreground of a photo and some objects behind the dog. Some objects are closer to the camera than others. If you recorded that scene on moving camera, all the objects would move at a different speed, creating a sense of depth.

The 3D Wire Mesh is generated automatically. You could say that the 3D Wire Mesh converts the image to a 3D image. So, if the automatically generated mesh needs some adjustments, making the necessary alterations is incredibly easy. An automatic calculation is then made that demonstrates how the image would look from a variety of different angles.

Check out this video from the creators where you can see the different tools offered by VoluMax 6 in action.

VoluMax 6 comes with 4 Products in 1.

VoluMax PORTRAIT is designed specifically for creating 3D Portraits. Once the earlier described depth map is generated, you can use the controller and move your scene in real time 3D, via the viewport. With the Eye Tracking Tool you can ensure that the subject is directly facing the camera while you move the scene in 3D.

VoluMax LANDSCAPE contains special features that generate 3D landscapes animations in minutes. All you have to do to create these animations is draw 3 simple masks over your image.

Next step is to add water, ground or sky layers if needed. If you’d like, you can add additional 3D objects (up to 5) to your scene – for added realism. You are also able to animate the water and add waves to the water surfaces with the water animation tool.

VoluMax SMART can be used on a number of objects. The creators call it “the swiss knife of 3D photo animation“. The tool can be used on various subjects thanks to a few powerful smart objects that are based on simple masks. This includes 3D planes, auto Volumizer & Detailer, Local Depth Map corrector and much more. You can also add more details with the Paint Depth Map tool or enhance the 3D effect by adding 3D particles.

You can add additional 3D objects, text, particles and flares for added effects.

VoluMax 6 comes with an online 3D particles library. The particle system is fully integrated and automatically animated in your scene – with just one click.

All the systems can be customized and adjusted. You can adjust the density, chaos, correct colours, 3D intensity, opacity and add individual blur layers. You can also use the Custom Particle System and import your own creations.

VoluMax 6 is Facebook 3D ready. It comes with export presets and a video tutorial to get you on the way.

Several companies and organisations use VoluMax 6 for their productions, including; EditingCorp, LayerLemonade, Video Effects Prod and Motion Designers Community – who are excited about the features. EditingCorp says “I have used various photo animation tools in the past, but after testing out VoluMax Pro for a month, I can say it is currently the best 3D photo animator out there“.

Cyberpunk Design Elements that you Need to Have

We recommend using Adobe Photoshop or Adobe Illustrator for the resources you can download at Xquissive.